Not BGW, But Just Another Gallery Weekend in Berlin 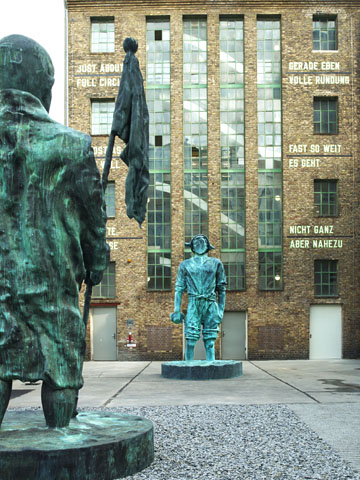 (Berlin.) This first weekend in May was supposed to host Berlin Gallery Weekend 2020 which, of course fell victim to the “virus crisis”. At least in one respect, they’ve been lucky: It was raining Chinese dinners, and temperatures appeared more appropriate for winter than spring. But of course, we wouldn’t be stopped by those circumstances, and enjoyed just a regular gallery walk. Like pretty much everything else, gallery visits are different now than they've been “before”: Once having checked who is already open again, you not only need to grab a face mask (it still feels strange, when even security guards of banks are asking you to hide your face), but sometimes even to book a time slot for your visit. The upside being that everybody may for once feel like a serious art collector, one of those for whom even the most irrelevant gallery puts the words “and on appointment” on its door and website. One of Berlin’s biggest, most famous, and even best galleries, Sprüth Magers also requires that online registration, yet when reporting for duty, nobody checks the lists - it almost feels disappointing. But as long the halls are empty, why bother with hysterics? Both shows here have opened in mid-March already, and now been extended until the end of June. On ground floor, that’s Kara Walker with an animated film in Chinese Shadow Theatre style, and a wall of corresponding drawings. In explicit scenes of sex and violence, these works tell of attacks and lynchings in the post Civil War American South. Coming to terms with the past from a victim’s perspective - how could you possibly criticize that?! A little bit Confederate bashing seems also very fashionable, and will sell well not only in the gallery’s LA branch (not excusing any crimes here; but generally speaking, Gone with the Wind wasn’t bad, either; or the Dukes of Hazzard. Without digging too far into politics: it is possible to condemn violence and not join the choir of “unity above all”, indeed even to applaud every secession as being instrumental for true cultural diversity in competitive pluralism). Upstairs, we stay on the same continent, with pastel drawings of the late Richard Artschwager. Created at the very end of his long career, they appear voluntarily naive and childlike – until you take a step closer, and recognize their nonchalant mastery. Abstract landscapes in horizontal lines, almost flag-like (thinking of Jasper Johns?), the senior artist revisited basic impressions from his youth, fields, plants, trees, those simple pleasures. But his place in art history, Artschwager secured with different works, and long before. On a side note, there seems to have been a recent change in communication strategy since the dealers arrived at least very near the summit, with exhibition spaces in Berlin, LA and London, as well as sales offices in Cologne and Hongkong (only on appointment): In all communiqués, and even the SE optimised Google result, you'll no longer read “Sprüth Magers (Gallery)“, but, somehow more complicated, “Monika Sprüth and Philomene Magers present/are proud/whatever...“ Newly discovered vanity, or has some PR manager told - and sold - them the idea, this would give proof of “down-to-earthness” and “personal engagement” as opposed to faceless big business? Just wondering...

While further preparing for this cancelled Gallery Weekend, we learned that until further notice, FeldbuschWiesnerRudolph only opens on Fridays and Saturdays (and on appointment). Fingers in Many Pies, the title of Anna Nero’s debut exhibition sounds promising – even subversive, as today you better keep your fingers and other extremities in at least two meters distance from any pies! And yet, this show opened on March, 13th already, and thus bears no link to “recent events”. In parts appearing exceedingly phallic, in others only digital, her paintings and sculptures of geometric forms and tentacles suggest, the young Russian artist still has some potential to improve. Hardly more hygienic associations surround the Berliner Luft - Berlin Air - at Dittrich&Schlechtriem, evoking the title of an old folk song, but it’s not even a true, physical, show, only a series of videos streaming on the gallery’s website, with works of all artists from the gallery’s stable. Talking about the internet: At Michael Janssen you'd read (until lately at least): “Current exhibition: ANDERS KJELLESVIK, Breaking Rules Together, 10 March – 23 May 2020 Opening: Saturday 7 March 2020, 5–8 pm ... The gallery is temporarily closed due to Covid-19 circumstances, but we will possibly re-open this Friday 24th of April 2020.” – Excuse me, but: What?!? Breaking rules, even together - or not? Apparently not, not “irl”, he’s harmless, and follows the orders. The 24th has been a week ago, by the way. Matter of fact, many of us thought about that Brussels Gallery Sorry, we’re closed these days – wouldn’t it be the moment for a name change to “Surprise: We’re open“? However, we stay in Berlin, and only change the district. For quite a while already, Potsdamer Straße has not been what it was still two or three years ago, and now the area is in danger to loose its status as a gallery hot spot for good. Not only shaken by the Chinese Flu, but grappling with the wreckage of local flagship Blain Southern who went out of business two months ago – it feels like ages! You might say, they’ve been trendsetters for the last time... Guido W. Baudach Gallery still abides the storm, residing in one of the very few side streets of “Potse“ that is not the “home office” of young females of South-Eastern European extraction, who’ll approach dignified collectors and impoverished artists alike (it is a rather poor area) with offers accounting to the exact opposite of social distancing. But about Baudach: On first look, Philipp Modersohn’s (no “–Becker”!) works perfectly fit the circumstances – Are those not viruses dancing in triumph, or streptococci at the very least?... Only a cigarette butt? ...Bent concrete pile? ...Plankton maybe? The animated film is quite abstract, the music classical, their dance choreographed, and yes, that must me plankton, and molluscs, and corals, as in true silent movie tradition we read a dialogue: “Where did the wave carry you?”, “How have you coped with the storm?” (or something like that, memory protocol here). Plastic covers the ceiling and emanates that distinct smell of action figures, it might be intended to send us to the bottom of the sea. Modersohn’s sculptures are impressive, really abstract metal structures neither anchors, nor reefs, but something in between, and overgrown with what could be algae, even plastic bags are harmoniously integrated. Wait, what? Is this even politically correct? What about the oceans, aren’t we supposed to clean the plastic out of there? Of course we should, but still, art has a place for every outcast. Sadly, the explanation text doesn’t provide any explanations at all, but only the excerpt of a short story about different kinds of materials and minerals on trial, being accused of influencing the weather forecast. Our verdict is spoken without lengthy deliberations: Hidden meaning and open aesthetics, a confusing, i.e. challenging, and thus great exhibition! carlier∣gebauer has been one of the first to leave the house arrest, and here we discover some unsuspected parallels. For a start, three videos take the main space, screens hanging from the ceiling without a discernible link between them. First: Billows of smoke, feathers falling under water, the aftermath of an explosion? Second: A car from bird’s view, circling and drawing rings (petrolheads say “donuts”) on the concrete – Olympic or Audi’s? And again: Is this still acceptable, in climapocalyptic times? Third: Digitally created, or at least photoshopped, images of an old-school camera with its tripod before the sea, ceaselessly turning around its own axis. And further, in a side room, another film of a candle dripping wax – upwards. Owing to the gallery’s (partly) French roots, we silently recite Brel, „on se croit mèche, on n’est que suif“, but what in the world is Sebastian Diaz Morales trying to tell us? „Dust“, says the leaflet in many more, and more elaborate words, that’s his topic. One last screen shows the test card, ah no: that’s tarmac in close-up, and the camera rushing by, as road lines appear and vanish where skid marks turn into characters of a lost language. Returning to the main space, we discover the backside of that rotating camera, and there, drums being drummed. However, engine noise remains the only sound. Is this more than ”interesting“? The third space takes Richard Mosse with neo-surrealist photos, psychedelic organ-galaxies or organic spaceships, flowers under the influence of a microscope – these associations are not entirely wrong: It’s UV-Light-Photography of plants and animals in endangered rainforests, and indeed interesting, without quotation marks.

Last stop today: Konrad Fischer Gallery with Thomas Schütte. In the courtyard, two gigantic sculptures welcome the visitor who only wants to get in as fast a possible for the rain is getting heavier by the minute now. They reach a felt five meters high up into the clouds, one holding a flag, the other his face in hand, staring each other down as if preparing for a duel. Inside the former factory building, the show starts slowly, with an installation that you might, somehow disrespectfully, refer to as a “bowling alley” with lighthouses and board game pieces for pins. Then, there are the most familiar Schütte heads, a lot of them, multi-coloured and in ceramics, (Venetian) glass, or bronze. As you walk along among them, perhaps trying to detect more influences apart from the proverbial Messerschmidt tradition - three shrunken heads on a pedestal might smell of Bacon, a bigger, neon-orange, one evoke the artist’s Dusseldorf neighbour Katharina Fritsch -, you hardly ever feel surprise: Of course, this is great, but in a way, also routine (on the highest level). Add some portrays like concert posters of Blues singers (Otis Redding before a blue background, obviously) on the mezzanine, a series of fruit, and more water colours, lithographs, etchings. Second floor, and tin angels hover – conditioned by pigeons, the big city dwellers instinctively ducks and covers – over classical busts, surrounded by one more series on paper. All Schütte™, big art and panic-proof investment, this is fan service at its best with works from more than a decade, in other circumstances it would have been a massive payday. Alas, today, the factory is empty; you always know how bad things are, when a dealer is not hiding in the VIP area (/too busy to leave the office), the dinner had to be cancelled – has Schütte even travelled to Berlin? Speaking without irony here, we feel sorry, it could be hard to digest even for this gallery. O tempora o mores (or morituri).