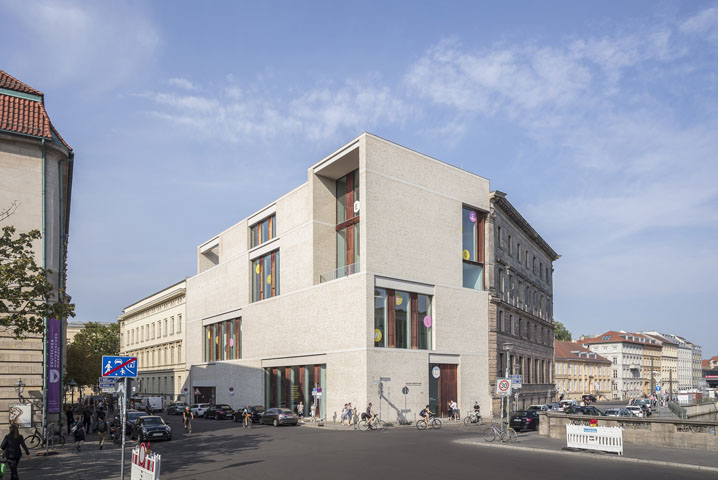 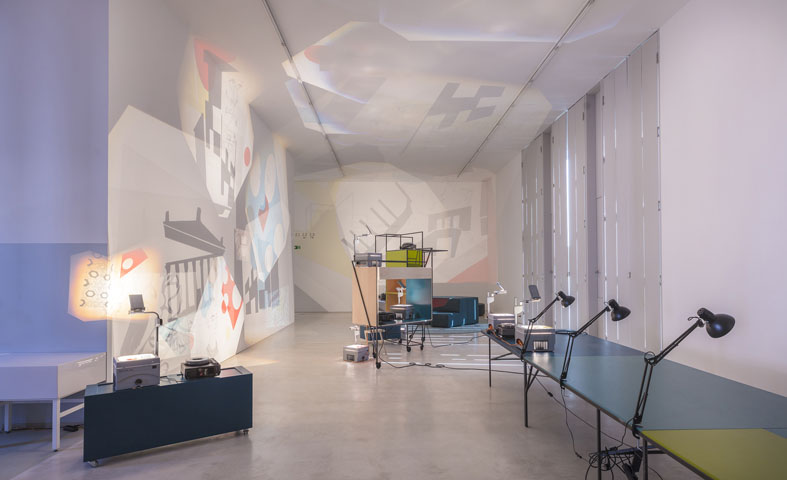 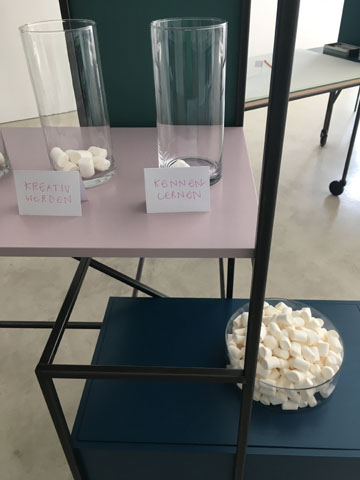 (Berlin.) Berlin Art Week is the other annual event that keeps the Berlin art scene alive and born in 2012, it is still growing, apparently: This year's BAW will last for two full weeks – unofficially at least, if you count in all the openings too, that are not found in the official selection but that not by chance are happening these days; prompting the question whether we should not better change our beloved acronym to “BAWS”? And while we’re at it, maybe add one of those fashionable asterisks that don‘t indicate a footnote but claim a place of importance by him-/her-/itself: BAW*S (m/w/d) – now, that certainly looks impressive! "Big BAWS - forever artspreading", there's a slogan in here!

For the broad public (that`s you), the circus commenced with the inaugural weekend of Haus Bastian on Saturday, 31st August/Sunday, 1st September, for members of the press and humble bloggers even a day earlier still. At the same time, another event kicked off, the KGB Art Week which for a change is an official abbreviation designating Berlin’s Municipal (“K/Communal”) Galleries, of which you will find one in every neighbourhood, but frankly the little I’ve seen of it is not exactly noteworthy. And then, still on the 31st, there was also the – for Berlin standards indeed very short – “Long Night of the Museums” when several venues finally opened at reasonable hours until 2 in the evening, but we’ll skip that, too.

The David Cop-, no: Chippenda- no: Chipperfield! - always get those names mixed up, sorry - designed Haus Bastian formerly housed Bastian Gallery, who for a while shared it with cfa gallery, but eventually the dealer clan decided to hand over the keys to the city (or some art related body owned by city, state, or whoever), in a transaction not devoid of... well, let’s call it ”complications”, ”misunderstandings”, that had us alternately wondering whether the family fully grasped the meaning of those terms “donation” and “gift”, or placing all the guilt with the bureaucrats on the other side of the negotiation table. We’ll never know about all circumstances but in the end, everybody appears to be happy. The gallery of course has not become homeless, but moved on to greener pastures, to that art dealers’ haven, the land of milk and honey - or vodka and hummus -, a city where every passer-by is an oligarch, or sheik, or football player roaming the streets forever desperate for the next best occasion to spend one, two, or ten millions that are burning a hole in his bodyguard’s briefcase, preferably before the next ever impending assault of an impertinent tax inspector, in one word: London.

The clan’s patriarch, Mr Heiner Bastian, has lived an extraordinary biography for our times. Later also doing poetry and translations, he once starting off as PA to Joseph Beuys who would bequeath him enough artworks that he’d never again find himself under the obligation to work, and a potentially even more precious address book on top – the two indispensable prerequisites for anybody projecting to open an art gallery. Whether Mr Bastian was a cultured man before, we cannot presume to know, but he puni- gifted! his son with the name “Aeneas” stemming, of course, from Greek mythology, to make sure that henceforward everybody would know how cultured he and his are. Aeneas Bastian, Esq. today manages the gallery’s operations in Mayfair.

The Bastians’ former Berlin abode is situated in one of the best, in a very democratic sense even most popular, areas of Berlin, on the same street, “Am Kupfergraben” (literally: “By the Copper Trench”) as the comparably modest apartment of an elderly couple going by the name of Merkel. Upon entering – Haus Bastian, not Haus Merkel!, visitors wonder, whether there have indeed once art exhibitions taken place here, as inapt as these rooms appear? But it is true, and to be honest, for a famous architect designed exhibition space, it could be much worse – it could have been done by Jean Nouvel for example (only think of the atrocity that is Parisian Musée du Quai Branly). Mr Chipperfield left at least some room for art other than his own.

Haus Bastian is not your average white cube, or at the utmost a distorted Rubik’s one, a many windowed maze, and many, and large!, windows are not the best place to hang artworks on, they create reflections everywhere, and cannot even be used for the projection of films – in the end you always find yourself forced to cover them with large, and ugly, curtains. But further exploring the many floors of the grey monolith that undeniably counts Bauhaus among its inspirations (more about that anniversary later), letting your gaze fall out of those windows and wander along the masses on Museum Island and the street below – wait, why are there washbasins almost in the centre of the room, and so close to the windows, did they indeed put the restrooms here, allowing the art collector to finally experience the all too familiar feeling of p---ing on the plebs even literally? - but what I really wanted to say is that you might eventually arrive at the conclusion, Haus Bastian is an even more elaborately crafted masterpiece of the plastic arts than the face of the gallerist’s wife. And maybe those basins have been added only lately, in the course of more thorough makeover works that will certainly have taken place, because this is arguably the one most important piece of information to take away today: There won’t be any more exhibitions of professional artists at Haus Bastian in the future (unless a sudden change of concept occurs, which I wouldn’t rule out altogether)!

Instead, the new masters will use the building for an – perhaps a little bit oversized – centre for cultural outreach and education, a place dedicated to teaching Germans and their visitors from abroad about art and culture. They express themselves particularly proud about the uniqueness of this project, there’s nothing comparable in terms of grandeur and attributed relevance in any (other) capital of the art world, not in Paris, not in New York, no, not even in Peking or London. ... ...Well, maybe,... I mean,... only hypothetically speaking,... this could have possibly inspired other feelings than pride too, you know, they could have taken the fact for a motivation to think it all over again, and wonder whether there were no particular reasons for the singularity, and how perhaps it might not be that brilliant an idea after all. But then again, perhaps the Germans do have a more profound need for – and interest in - instruction and cultural schooling than other peoples, although... considering it again: there’s also ‘Murrica, and... well.

One more thing to note: Only months ago, and immediately vis-à-vis, the James Simon Gallery opened, named for another mercantile legend and art collector, and dedicated to... well, basically it’s sort of a – perhaps a little bit oversized – wardrobe of Museum Island. From Haus Bastian you may contemplate the motto inscribed high up on its facade: “Artem non odit nisi ignarus“ which translates to “Only the unknowledgeable despises art” (I must confess, in my pitiable attempts at translation I confused “odit” with “olet” as in “pecuniam”). Still one might entertain doubts whether those projects are money well spent - even donations can and will entail consequential charges, and Berlin art institutions are not exactly smothered in funds. But “education” is probably easier to sell in the competent places than art itself – “education” is always great, voters love “education”, especially if it’s for children and other people’s sake. Politicians love education too, not least because it rhymes with “indoctrination”. Whereas both will only scoff about art, particularly in its “modern(sic!)” variation, those shenanigans, in Germany this is true even for those who could – monetarily – afford a different point of view, which takes us back once more to the specific German need of a “Centre for Cultural Education”.

But what are the changes of this (for that matter: any) top-to-bottom approach to change the situation? Let’s be frank: The school class decoratively placed and employed in pottery during the press visit will have been most grateful for the day off from regular lessons (even though it was a Friday, and art and culture are certainly not “the future”!). As a general rule, what you’re taught in school you mistrust, even loathe, for an annoying obligation (exempting the teacher’s pet here). True education, schooling of the character, the internalisation of (a) culture has always been happening elsewhere, in structures you are – or people of former eras have been – born into; there’s a difference between values you breathe in your free time and those you are fed with in school. For the pupils who will be taken here by more or less motivated teachers, their journey through the city and the time it takes, will be most welcome, but once arrived, it’s all about waiting for the bell, as usual. Besides, it still remains unclear what activities the Centre for Cultural Education will offer exactly - what does all the fancy marketing talk boil down to in the end? Apart from pottery courses. Saying this, they definitely do put a focus on practical lessons in arts (and crafts). I don’t know if it’s for the location on Kupfergraben (rather not) but on preview day, somebody had organized a little game of democracy, where every (involuntary) participant had to cast his ballot by marshmallow. Literally: next to one of the afore-mentioned water basins, where the press conference took place in an improvised amphitheatre (forever the classicist!), several glass cubes contained marshmallows at different filling levels. No homunculi stood up to election in the oversized test tubes, but concepts, ”party programmes” written on little pieces of paper, from “coming to know" (also translatable as "making new acquaintances”) to “go creative”, “3rd place”, “Occupy”, and “Further Ideas”. Smells like brainstorming, and a rather uninspired high school teacher. Maybe some voters were hoping for the greedy boy who’d eat them all, and others for a fire to roast every idea/‘mallow.

Most of Haus Bastian’s floors look annoyingly alike, so much so that you never quite know where you are – almost brings back memories of endless high school corridors, desperately searching for that one room where the exam had begun half an hour ago... There’s nothing you wouldn’t find in any Berlin school, minus the drugs and gang violence. White painted rooms, studios, for pottery, painting, and even computer design – Apple has sponsored three brand new iMacs (an acquaintance of mine is earning sh---loads of money with lobbyism for Microsoft – have to ask him occasionally how his colleagues could miss out here – they do operate a co-working space/café almost around the corner, on Unter den Linden avenue). Elsewhere an army of 1980s style overhead projectors is creating a collage on the wall, with Nefertiti and Berlin tourist hotspots. Also a - still sparsely equipped - library, that one day shall host an extensive collection of “didactic literature”. For a start, there’s a brochure on “Education in Mosque Communities”. How that’s art and culture related, you’re asking? Well, I haven’t put it there, but it’s certainly all the fashion, and again very much sellable in competent places. To be fair, they are very open about Haus Bastian not being restricted to art and culture, “political education“ is another much quoted keyword. One might ask in all innocence, up to what point it is acceptable for the state to exercise its influence in the education sector, but that’s a more fundamental question. Personally, hearing of “political education” always makes me feel uncomfortable.

For the museums and cultural actors involved, it’s all about new markets, about new and ever more visitors, they already dream of taking people from the socially charged areas of Berlin here. It will remain interesting to observe, who turns up out of his free will, not forced by teachers, social workers, migration or rehab officers.