Nigeria to Berlin: With Otobong Nkanga at Martin Gropius Bau 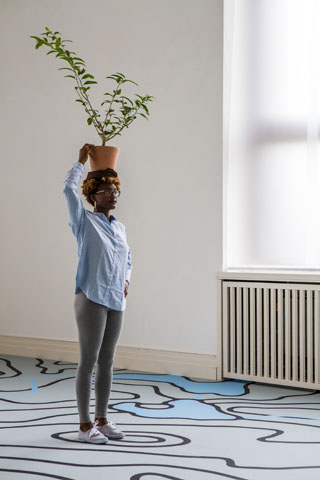 (Berlin.) Entering Otobong Nkanga's show at Gropius Bau, we step right into a Zen-like stone garden, feeling anxious if this is indeed permitted – it’s nowhere explicitly stated, but other patrons simply marched on, and the wardens didn’t complain (maybe they’ve all spent too much time at Hamburger lately?). Standing on the pebble field, marble plates - or is it metal? - on the soil change our associations to a (potentially Jewish – stereotype? yes, but pebbles...!) graveyard; there are, however, no dates or inscriptions.

All pebbles are “whitefacing”, covered deep in chalk, and I certainly would not have said that, were it not for the artist: Identity on the globalized (art) market, it’s complicated. Nigerian Otobong Nkanga lives in Belgium, and her art is not “ethnical”, but decidedly “global” (don’t you add a nasty “-ist”), dealing with, among other things, “colonialism”, or so we are told (following the colonialists home instead of strengthening an independent Mother Africa, so to say - don’t you ever say, or even think, so, it’s dangerous!).

Putting the pebbles back – not sure if we were really allowed to pick them up even if MGB is cool with walking upon them -, we discover white traces on our fingers that make us instinctively look for a pommel horse, but relax, it’s not magnesia, this is not a gym, and you’re certainly not back at school! As impressive (well, in a way...) this first installation is, we already meet upon a main problem with the show: There’s zero explanation around. Nothing, nichts, nada, niente, rien, ohunkohun. Nowhere outside the small catalogue (€5). If you leaf through that catalogue, you will find an attachment with “exhibition texts” – maybe they just weren’t there yet on the preview, or should we really have failed to note any of them (no matter what marketing keeps telling you: never exclude the possibility of own mistakes)?! Be that as it may, there’s a huge discrepancy between what you see and what you - are supposed to – get, in a show that can hardly be understood without a guidebook.

Continuing the visit, we see a “digital” looking, but in fact acrylic drawing of half a body (mutilated or unfinished work?) a little like a puppet on strings, next to an English - not Yoruba, or an any other of Nigeria’s over 300 pre-colonialist languages - poem on gravestone looking paper, that seems to be about ...- well, assimilation, breathing, and the odd bit of boy meets girl. In the middle of the room, several sculptures evoke a group of mesas (regular MGB patrons might feel reminded of Lee Bul’s South Korea) with a crater, or pool, inside of each, potentially of “artificial” origins: mines carving into the soil. An accompanying video on a – very - small screen with – very - quiet sound features the artist talking and moving, maybe even “doing the robot” dance. It might take you a second or two to notice, but in her background, there’s the same installation as behind us, and eventually, Nkanga takes handfuls of ashes, or sand, from the “pools” to throw – or sow? – them around. Mysterious. On second look, this feels even reminiscent of separating gold nuggets and other precious things from mud and soil – blood diamonds? Let’s hear, what the catalogue has to say about this: ‘Resources, inspired from a journey to Namibia’ - strike!

The show continues with rather unremarkable drawings, and a sound installation in the darkroom (no, nobody’s hiding there, camouflaged in and by blackness), with stools practising social distance - at this point, it’s time to praise MGB: they’ve notably toned down on the disinfectants since our last visit, but I honestly doubt, it’s because of my words. Lean back, relax and listen to “African rhythms” and somebody singing in equally “African” ways (that’s extremely stereotypical, right?).

Already having reached one end of the show, we turn back, pass the “cemetery” again, and arrive at a cosy little backyard distillery - in the mood for some moonshinin’? By now, the lack of information becomes seriously disturbing, but at least there’s some more – and this time indeed: impressive! – drawings on the wall, somewhere between oil puddles, molluscs, and cut up potatoes, in different shades of black and grey. Catalogue: panta rhei, in matter and “politics”.

Follow two female performers - racially profiled, or at least: cast - in v e r y tight grey leggins (at least one of them was to pity for the as unavoidable as obvious sweat stains and it wasn’t even a hot day, climate change once again letting us down in Berlin this ”summer”) in mid of a painted maze on the ground - now, there’s a sign: “Please stay outside of the lines“. That one performer keeps spinning around her own axis, ever dragging a leg behind to create a peculiar sound, while others originate with her companion who’s standing still except for stomping now and then, or grunting indistinctly (I briefly believed, she was addressing me, not being allowed to take pictures even on the press preview. She didn’t, and my stuttered excuses, “didn’t... you... only”, pointing to the floor, must have seemed really awkward). It's apparently all about the rhythm (that they don’t have in the blood, don’t you dare implying culturally created diversity in times of global equality). Did I mention already, that they balance plant pots on their heads, like women, eh: people! do in Lago- eh: Berlin, New York, London, everywhere the same?

Contrary to the catalogue’s claims, they don’t “keep their eyes fixed on the ground” but fixate every single visitor, right in the eyes; maybe they haven’t read the instructions carefully enough. It further mentions a “dialogue between women and plants”, the latter having been forcibly migrated from Africa to Asia centuries ago, while the lines on the floor supposedly evoke borders of imaginary nations. The work is called Diaspore.

Finally, a last room hosts the largest installation in show: A circle on the floor, an electrically operated stone circling around it own axis (wait, didn’t we describe something similar before?!), and a somehow “mythological” drawing of a pitch-dark galaxy, a human body, and a tree, among more undistinguishable shapes. ‘k. Black... holes (oh, those “racist” astronomers!)? 'No', the catalogue weighs in: ‘elements, breathing, politics, society’. Suddenly a noise is heard like of a valve letting off steam – oxygen, or some other gas. Can’t... breathe? What were those lines in Nkanga’s (? maybe it's just a quote?) poem again: ”Breathing relentlessly // On a sliding territory //...// Gasping desperately”? ... -> Cop induced black asthma? But do they feel as much as American citizens in Nigeria as people do for example in Berlin, judging from certain demonstrations here (there’s a lot of, even deadly, police violence happening in Nigeria, that even immediately concerns us, being a valid – and perfectly justified! - reason for asylum, but who would give a ---- ?).

And that’s all in a rather small show, you might also visit fellow Nigerian photographer Akinbode Akinbyi’s bigger one upstairs at the same house (I don’t even know, if “big house, small house” jokes work in Nigeria, or would that be further south on the #000000 continent?). Trying to make sense of all this, ... we’re clueless. Circles might play a central role in Nkanga’s work, they definitely do matter to her, if only visually. Circular... lives, ...matter?

As a privileged member of the propaganda industry, no: “press” is the word, I’ve later been told, Nkanga’s art were about “engaging with the soil”. Nigeria’s soil is certainly soiled by oil and other ressources, and foreign companies are ever happy to help out, extracting the “black gold 2.0” (which is why that "Nigerian prince" keeps mailing, asking for help to get all those millions out of the country... ;) )

If you visit, buy the catalogue. It’s imperative. Maybe only buy the catalogue – the art hasn’t much to add. The works aren’t nowhere as important as the message (supposedly) hidden in them, and art, that doesn’t work without a manual – well, personally, I’m not a big fan... If only the installations were visually more impressive, it wouldn’t matter all that much. But black arts matter without a question, and – wait, what? Let’s better make that “blacks’/black people’s art”... Nkanga might very well have some smart ideas, but sadly, she isn’t able (at least not on this occasion) to put them into a memorable, visually appealing, or only interesting, form. There should be more to art than merely thought and theory. Isn’t it annoying how you can never be sure anymore if it’s indeed art that has landed her this exhibition spot, and not something else?